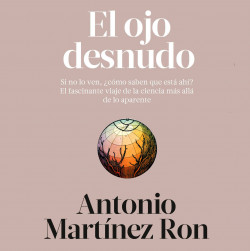 In the basement of the Manchester Museum of Science and Industry there is a box with small residues that look like fragments of dry skin. These are the remains of John Dalton’s eyeballs, the father of atomic theory and the first scientist to describe colour blindness. Dalton left his personal doctor in charge of removing his eyes and “strip” them after his death to clarify a mystery that he could not solve in life: why did he see the world differently from others?

With this anecdote, and Dalton’s life as the organizing thread, The Naked Eye reconstructs the history of our knowledge on vision and light, and offers us the explanation of why we see the way we see and how we have come to understand phenomena that are far from what our senses allow us to detect. In these pages, the scientific journalist Antonio Martínez Ron tries to answer questions such as what colour and light are, and how we have learned to look at the universe. A journey from the eye of the first men who observed the sky with a naked eye to those who turned the instruments upside down to look inside ourselves. It is as well an adventure that has led us to overcome our limitations and become the species that sees everything.

Antonio Martínez Ron is a journalist and scientific promoter. He has worked as a science editor in different newspapers, radios and televisions and he is responsible for some of the most successful digital promotional projects in Spanish, such asNaukas.comandFogonazos.es. During two seasons he participated as collaborator of the program Órbita Laika (TVE), he is the author of the book ¿Qué ven los astronautas cuando cierran los ojos? and director of the documentary El mal del cerebro. His work has won numerous awards in the field of scientific journalism and promotion.