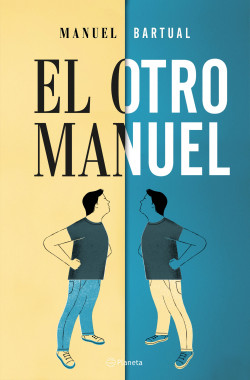 On a night just like any other, surrounded by boxes from his recent move, Manuel orders food for delivery, but his order is wrong. They have brought him dinner for Alicia, a neighbor, who for her part has received Manuel’s food and who will meet him thanks to this confusion. What seems like a random occurrence without any further importance will be the spark for the strangest days the two of them have ever lived through, and will turn them into the key figures in a mystery. Figuring out who is behind it all will be the least of their worries.

The Other Manuel is an original, surprise-filled novel in which Manuel Bartual tells how an average person’s life can change with unexpected success. A tale that begins six months after he finished his intriguing tale of summer, but with a difference: now, it’s not fiction, but reality that sets the pace for the narration, and as we will see, there are times when the truth is far stranger than fiction. And this is one of them. This time, something really strange is happening to Manuel.

The Other Manuel asks: what happened to the author in the six months since the end of his summer story? What is his life like now, when people recognize him walking down the street? How has all this affected his family? And most importantly, who or what is behind the strange things – this time in real life – that have started happening to him?