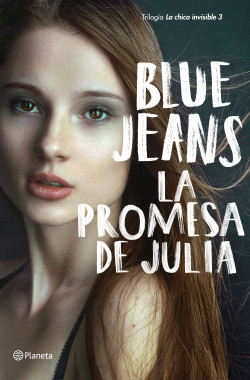 Love, friendship, and mystery come together in the long awaited conclusion to the Invisible Girl trilogy. More Blue Jeans than ever!

When Julia starts studying Criminology at college, one of her professors soon realizes that her intelligence stands out over that of her classmates, and he decides to present her with a controversial task: analyzing the case of Pedro Juncosa, a psychologist who died from hanging five years ago. Everything seems to suggest that he took his own life, but the professor’s own opinion and subsequent investigations on his part make Julia seriously doubt it. Was it really suicide? What evidence did the criminal leave behind if it wasn’t voluntary death?

Without her wanting it to, the new case will change everything for the girl, including her love life. And her fast friend Emilio will meet a strange young woman at school who reminds him of Aurora, the “invisible girl,” and hides a complicated past. Vanesa, who has recovered completely and is now working in her parents’ hotel, receives an unexpected visitor that will make her life difficult.