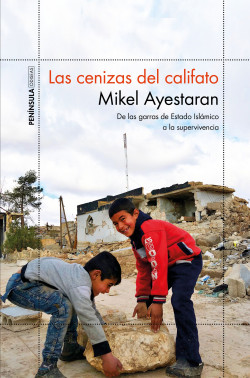 The Ashes of the Caliphate

The loss of Mosul by the Iraqi forces in July 2017 marks the beginning of the end of the self-proclaimed caliphate of the Islamic State group and the beginning of a new era in the Middle East. After three years of mandate, with a flag and marked borders, the followers of Caliph Ibrahim started to live clandestinely, and they surprised the world after conquering almost half of Iraq and Syria, resisting to the death thanks to their suicidal army.

The region is struggling to recover normality since it is immersed in uncertainty. This is so because of the lack of governance created in the areas that were under jihadist control, as well as new zones of influence that the world and regional powers are fighting over in Iraq and Syria

The journalist Mikel Ayestaran was in Baghdad the morning in which a then unknown group, the Islamic State of Iraq and Levant, took Mosul, and three years later witnessed the fall of this same city and the "defeat of the caliphate", as announced by Iraqi politicians. On the ground there was nothing to celebrate: the legacy of the caliphate is nothing but hundreds of ghost towns and devastation. The lack of social services and, above all, fear generated by the Islamic State means that civilians cannot return to their homes; far from disappearing under bombs, the Islamic State returns to become a terror in the shadows.