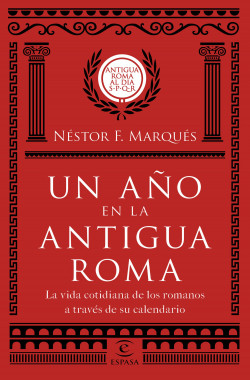 A Year in Ancient Rome

Although sometimes we do not realize, we are the direct heirs of Rome, its culture and its way of conceiving aspects as determinant laws, social structure or the passing of time. The latter will serve as a guide to enter the Roman world in a different way, through its calendar, with its months, weeks, days, hours and the main milestones that marked the day to day of those who used it to govern their lives before than us.

Experience now what could have been a year in Ancient Rome, from January 1 to December 31, on a journey through its culture and history -the big one and the small one- in which you will attend your parties, their civil and religious ceremonies, their daily occupations. From the emperor to the slave, from the merchant to the senator, from the soldier to the farmer, they all have their place in this work, which spans the more than twelve hundred years of history of this extraordinary civilization in which out roots sink.

The author uses the Roman calendar to tell the history of Rome, from the big events to the smallest details: the emperors and their conquests, the expansion of the empire, Roman politics, the arts, holidays, games, and the major milestones that left their mark on the day-to-day lives of soldierts, peasants, artisans and the Roman citizens and provinces.

The daily lives of the Romans through their calendar.