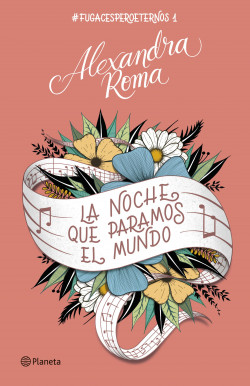 The Night We Stopped the World

A two-book series set in the world of indie bands. Love, music, drama and a protagonist, Marina, who is searching for her own voice.

After finding out that her boyfriend was cheating on her, Marina discovers yet another betrayal: her mother is going back on her promise to pay for a one-month cooking course in Rome. That was Marina's greatest dream, a dream she sacrificed to study International Relations because of other people’s expectations of her. Now Marina ends up doing the craziest thing she’s ever done: auditioning to be the singer of the group At the Edge of the Abyss.

Noah is a young musician who aspires to immortality through his songwriting, because for him people are ephemeral, but music is eternal. However, his terminal illness means he must achieve his dream in record time. He doesn't want to die, let alone become a painful and unbearable memory that people banish to protect themselves.

Then Noah meets Marina, the new singer, and between songwriting retreats, rehearsals, concerts in dive bars and festivals, and life in the tour van, he breaks his two rules: falling in love when it’s not an option and singing, because she can only do it when he sings with her.

Highlights The Night We Stopped the World

A 2-part series full of sensitivity set in the world of music and indie bands.

Love, music, drama and a protagonist, Marina, in search of her own voice.