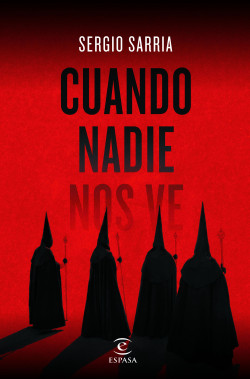 When No One Sees Us

A Mediterranean thriller set in the midst of Holy Week.

Holy Week is starting in Morón de la Frontera (Seville). Lucía Gutiérrez, a Sergeant in the Civil Guard, has an emergency meeting with the town’s mayor after various incidents involving the procession participants and drugs. Not long after setting up a recon mission, she discovers a suicide: Antonio Jiménez, driver of a school bus in Morón, has shown up dead in his apartment after committing hara-kiri. The next day, some parents report the disappearance of their seven-year-old son Álex. This won’t be any regular Holy Week, and despite appearances, all these incidents are related.

At the same time, things are also getting complicated at the American military base in Morón. The overseer is being blackmailed by Jack Taylor, a Marine lieutenant, who has gone from one base in Europe to the other since his days as a war hero in Afghanistan years before. Taylor is untouchable for his superiors, but he seems to leave a trail of horror wherever he passes.

Jack Taylor and Lucía Gutiérrez are on an inevitable collision course. Both have dark secrets in their past, and the reader will watch the conflict between the two of them take shape until it ends in a duel to the death with the Passion of Jesus Christ as a backdrop.

A duel in the sun between two characters with powerful inner demons: a sergeant in the Civil Guard and a US official, veteran of the Afghanistan War.