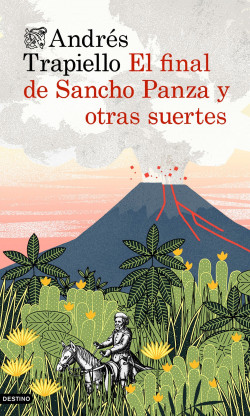 The End of Sancho Panza and other Tales

When Don Quixote died, he left behind many friends and relatives, including Sancho Panza, the scholar Sansón Carrasco, his niece Antonia and Mistress Quiteria, who were left bereft and grief-stricken.

The knight’s death brought with it incredible transformations: Sancho learned to read and read the story of himself and Don Quixote in the books published by Cervantes, the scholar mended his ways and Antonia fell in love with him even though she had another man’s child in her womb. But life in the village has grown so claustrophobic for the four of them that they decide to leave for the Indies in search of their fortune and a little breathing space after the shock of Don Quixote’s death.

Their journey will be filled with adventures, not all of them pleasant. They will discover the sea, its storms and pirates, the illusion of a paradise and the fear of losing it before they even get there. Once in the Indies, they will prosper and fail in their endeavours in equal measure and find their new lives mingling with their old ones as the shadow of Don Quixote and Cervantes, who are really one and the same, follows them to Peru along with characters that those familiar with Don Quixote and Cervantes know well.

The move of the characters from The Death of Don Quixote to America gives rise to new adventures for the most famous secondary figures in Spanish literature.

This is a story that, like so many lives, can only be summed up if it is told in its entirety, where meaning can be found in events both big and small. That’s why we call it a novel.

Published in 2004, this is one of Andrés Trapiello’s most successful novels, having sold over 30,000 copies. After the Death of Don Quixote also received several major awards: the Premio Fundación Juan Manuel Lara for the best novel of the year, 2005 and the Prix Européen Madeleine Zepter for the best foreign novel, 2005.

Andrés Trapiello is the author of a biography of Cervantes and a specialist in his work.