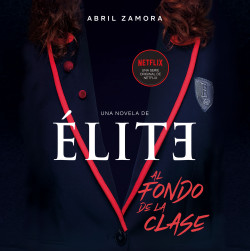 An Élite Novel. To The Back Of The Class

Intrigues, loves, and jealousies you will never see on the screen.

Paula is suffering in silence over her unrequited love, and Janine, a girl on the bigger side, has a secret that will put her in danger if it ever gets out. Her friend Gorka, who is obsessed with sex, has started to have feelings for the wrong person, and Mario, the bully who is repeating a grade, now finds himself on the receiving end of blackmail for the first time. María Elena lost her hair one time because of her emotional problems—now people call her Whiskers—but what no one knows is the family sorrows she’s living through behind her glamorous façade.

They have enough problems as is, but when the year ends, something unexpected occurs… Marina shows up dead on the edge of a pool, and the detective receives a strange diary full of contempt for the murdered girl. Someone hated her, and everything suggests it was someone from her class. One way or another, all five of them—Whiskers, Janine, Mario, Paula, and Gorka—will be involved.

Does the author of the diary have something to do with the crime? Who turned it in to the police? Why did they hate the girl so much? How did it get this far?