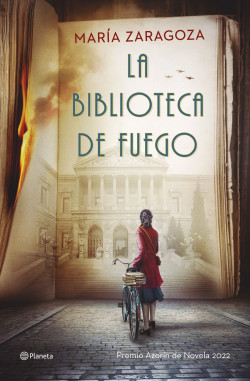 The Library of Fire

Tina is a young girl who dreams of becoming a librarian, and with that hope, she moves to Madrid to study Philosophy and Letters. She leaves behind the comfort of her village and the promise of marriage to Felipe, a friend she feels sincere affection for, but nothing else. She stays at the boarding house of her eccentric aunt Paca, a place mostly inhabited by elderly people, and there, she meets Carlos, a humble young would-be doctor who disdains her for belonging to a wealthy family. She will feel a strong attraction to him. But if there’s one thing that moves Tina, it’s her passion for books and her curiosity about a story her aunt Lolita told her about the Invisible Library, a secret society that protects books at risk from censorship and traffickers.

No sooner than she starts at Central University, Tina hits it off with the rebellious Veva, who brings her into a fascinating world of cabarets and feminist clubs and a universe of accursed books and old ghosts. After passing an unexpected test, Tina and Veva will join the Invisible Library project, carrying out several missions. Characters like Moonray, the driving force behind this society, and the mysterious and attractive Count Duke, his main enemy, will often cross Tina’s path, but she will never lose sight of her greatest desire after completing her studies: to work in the dazzling National Library.

Still, nothing is as simple as it seems. The air of freedom in Madrid has an expiration date after the failed coup that triggers the Civil War. Tina will devote herself to safeguarding culture, fulfilling her duty as a member of the Invisible Library. In the midst of a war that destroys everything, she will experience a clandestine love while trying to protect books, even when her freedom and her own life are at stake.

The Library of Fire is a thrilling and evocative novel about the love of books and a tribute to all those anonymous heroes who risked their lives to protect the treasures of libraries in times of war.

Highlights The Library of Fire