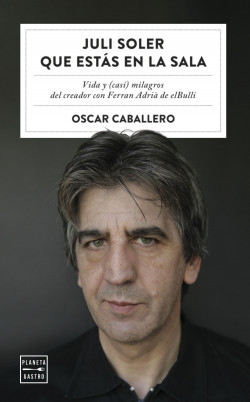 Juli Soler, You're in the Room. Authorized biography of Juli Soler

Life and -almost- miracles of the creator, along with Ferran Adrià, of El Bulli.

This book is the story of a famous little-known man, Juli Soler, prophet of rock in Catalonia in 1968/80, colleague of the Rolling Stones and, since 1981, founder of El Bulli.

Between 1984 and 2011, Juli Soler chose to remain in the background to give the spotlight to a chef he intuited would be great: Ferran Adrià. And to the best wines in the world. And above all to people, without distinction of class or category.

Under Juli’s guidance, princesses and magnates allowed themselves to be guided, humble for once. And those without rank were treated like stars.

Soler took the stiffness out of the haute cuisine restaurant, replaced menu with festival, and thus forged the environment of the revolutionary cuisine of a Bulli in world orbit.

Soler was 32 years old when, after the financial failure of a mega rock concert, he arrived on foot at what was Hacienda El Bulli. Within twelve months, he earned what would become his second Michelin star. After three years, he appointed as chef the young Adrià, who had little experience but infinite ideas.

Best Restaurant Manager in Spain (1989), Soler forgets prices and ratios. His objectives: for the diner to enjoy himself and for the genius to “lack nothing”.

Rare as his restaurant, with a fame inversely proportional to the one he yielded to the kitchen, Soler “quit” -as the bookmark obituary that fired him reads- in July 2015.

In this book, a chorus of voices -from the restaurant business, from music, from wine; from Spain and from France- tells the story, between exclamation points, of everyone’s Juli Soler.

Highlights Juli Soler, You're in the Room. Authorized biography of Juli Soler

Together with Ferran Adrià, Juli Soler was the great architect of El Bulli,  a legendary restaurant that has influenced and continues to influence chefs and restaurants around the world.

In addition to Juli Soler’s wife and children, Ferran Adrià, Albert Adrià, Josep Roca (who also wrote the book’s prologue), Fermí Puig, Ferran Centelles and Luis García, director of elBullifoundation, have expressly collaborated in the book with their most intimate testimonies.