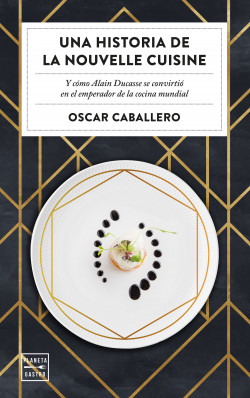 A History of Nouvelle Cuisine

The history of the nouvelle cuisine that conquered the world, as it has never been told before, of the invention of Mediterranean cuisine in haute cuisine and of its current emperor, Alain Ducasse.

This book contains two gastronomic revolutions: the birth of the French nouvelle cuisine in the 1960s with a crazy salad and a salmon with sorrel served on 33 cm plates, and the birth of Mediterranean haute cuisine, in 1987, in Monte Carlo.

The leaders of the former - without which there would have been no new, contemporary Spanish cuisine - were called Guérard, Troisgros, Bocuse, Gault, Millau. And the religion they founded, to which half the world was converted, even had a decalogue. It was launched in 1973 by the magazine Gault et Millau, which in turn revolutionized gastronomic criticism.

As for the Mediterranean phenomenon of 1987, which for the first time placed a bottle of olive oil amid linen tablecloths and silverware, it had its ideologues (Roger Vergé, Louis Outhier, Jo Rostang), its eminent disciples (Bruno Cirino, Jacques Maximin) and above all a codifier, Alain Ducasse.

Today, Ducasse runs more than 50 kitchens on three continents and is the world leader in the number of Michelin stars.

Curiously, until this book, no one had ever told the story of French nouvelle cuisine in detail, with the lives of its protagonists, nor the way in which Ducasse's own story came to be interwoven with that of nouvelle cuisine.

This book spans the 20th century - with even a halt in occupied Paris and the collaboration with the Nazis of a later famous critic - and extends to the present day, with Guérard’s proclamation that gastronomy never dies and Ducasse, who had innovated again with naturalist cuisine, reinventing himself.

Highlights A History of Nouvelle Cuisine

Oscar Caballero is one of the world's great gastronomic journalists.

There is currently no other work that narrates the history of nouvelle cuisine, indispensable for understanding world gastronomy, as this book does, structured in short chapters, narrated with journalistic writing and an agile tone typical of someone who knows the subject in depth and has the recognition of his interlocutors, the chefs interviewed.

With a brilliant chain of restaurants around the world, Ducasse is a phenomenon in the world of gastronomy, an entrepreneur and a formidable businessman, as well as a great culinary talent.

The book also includes a chronology with interesting historical notes on the social, cultural and gastronomic context.

Alain Ducasse is the world emperor of French cuisine, the great promoter of Mediterranean cuisine and the haute cuisine of vegetables. The youngest Michelin three-starred chef in France, he runs 30 restaurants on three continents and holds a total of 18 Michelin stars, an absolute world record.