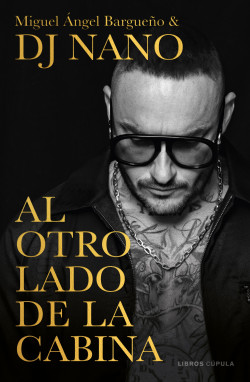 On the Other Side of the Booth

One of Spain’s most influential DJs, standard bearer of the dance scene for 20 years, explains in this book the secret of his success and anecdotes of his life as a DJ.

Active since the mid-1990s, DJ Nano embodies the history of electronic music. The visible face of an often hermetic movement, he has managed to cross barriers, becoming a media figure for whom lifelong fans, new followers, musicians of all styles and unexpected celebrities profess sincere affection.

Following in his footsteps means accessing the most exclusive clubs on the planet, such as Ministry of Sound (London) or T2 (Tokyo); going to the main festivals of the genre, such as Ultra (which hosted him on its main stage in Miami); knowing the secrets of great stars such as David Guetta, Fatboy Slim, Avicii, Tiësto, Steve Aoki or Armin Van Buuren, with whom he has rubbed shoulders. Sumptuous temples of dance and grimy clubs, the complicated world of nightlife, binges in Las Vegas, adventures in Thailand, downs in Portugal, duels with yakuzas in Japan, radio, television, tattoos, graffiti…

All this makes up the universe of the most internationally recognized Spanish disc jockey and he talks about it all in this book, in which he also recalls the atmosphere of legendary clubs such as Kapital, Paladium, Fabrik, Scorpia, Chasis, Pont Aeri, Privilege X and Chocolate, and shares countless anecdotes of hotels and dressing rooms. There’s no better guide than the creator of Oro Viejo, a show that has reached 25,000 people, to immerse yourself in the fascinating, excessive and fluorescent electronic music scene.