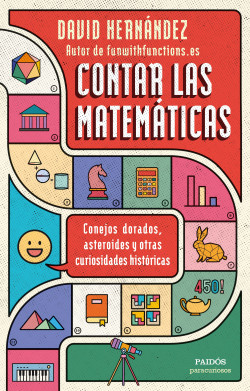 Asteroids, golden rabbits, and the shadow of a stick. A talent show of equations and the geometry fan club. Paradoxes with beer in infinite spirals. Numerical sects, killer beans, and poisoned apples. Cosmic harmonies and divine proportions in a universe full of sand. Magic squares and cubic taxis. Hexagonal turtles and monkeys with typewriters. Duels at dawn and geometrical epiphanies. Should we keep going? All this and much more is hidden in math, that subject so many people fear.

Counting on Math is a journey through the most fascinating events in the history of mathematics. Theorems and equations like you’ve never seen them before. If you thought math was boring, this book is for you.

David Hernández, a math teacher who managed to get his students to obtain an almost perfect average on their college entrance exams, offers a fascinating history of mathematics to bring everyone closer to this feared subject.

IF ONLY THEY’D TOLD IT TO ME LIKE THIS

If you’re one of those who think that mathematics is boring, it’s probably because what you learned at school was based on the repetition of monotonous exercises and you were never, or almost never, told the fascinating stories behind each formula and theorem.

If you’re one of those people who think mathematics is only useful for figuring out the cost of the products in the shopping cart and don’t realize the real achievement of mathematics is that you can pay with your cell phone in less than a second, even if you don’t have a cent on you, while listening to your favorite band on your wireless headphones, this book is for you. What seems like magic at first sight is possible thanks to algorithms based on formulas and equations discovered more than two thousand years ago by women and men with incredible lives who underwent extraordinary trials in the name of knowledge, changing the course of human history.