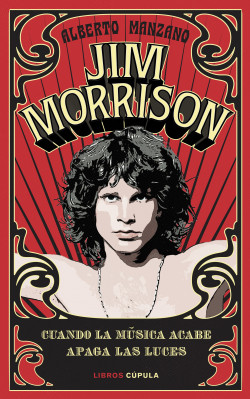 When the music ends, turn off the lights

Fifty years after his mysterious disappearance in Paris on July 3, 1971, this book aims to celebrate the life of Jim Morrison, the musician-poet and singer of The Doors.  Morrison’s philosophical, esoteric and transgressive work, immersed in the ardor of the American counterculture and the death throes of hippyism, tried to free people from their limited way of seeing and feeling life.

After six albums released in the late 1960s and numerous controversial concert-rituals in which Morrison seemed possessed by a shamanic soul while The Doors created hypnotic, cathartic music, Morrison renounced the favors of glory and fame, tore off his sex-symbol mask, and chose the “quiet journey” to be a poet working in his own garden: “Authentic poetry opens all doors”, Jim would say. “You can walk through the door that suits you best. That’s why it appeals to me so much, because it’s eternal. As long as there are people in the world, we can remember words and combinations of words. Only poetry and songs can survive a holocaust. No one can remember an entire novel, or describe a movie, a sculpture or a painting, but as long as there are human beings, songs and poetry will survive.”

The biography of Jim Morrison, leader of The Doors, the Los Angeles quartet that changed the history of music forever.