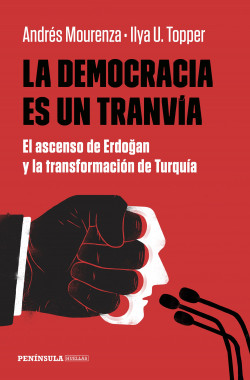 Democracy Is A Streetcar

“Democracy is a streetcar. When you reach your stop, you get off.” Two decades after uttering this phrase, Turkish leader Recep Tayyip Erdoǧan seems to have reached his stop: as a consequence, the country that was for years thought to be the paradigm for reconciling Islam and democracy is now on the verge of becoming an Islamic autocracy.

Following the life of Erdoǧan––from the hard streets of a humble neighborhood in Istanbul where he sold lemonade and bread to pay for his studies all the way to the summit of power––Mourenza and Topper analyze in this book the social and political dynamics that brought him to power in 2002 and how he has used his mandate to turn Turkey into a first-level geopolitical power that even attempted to export its model of Islamic democracy during the 2011 Arab spring.

Erdoǧan has embarked on a historic mission: transforming the country in his likeness. To do so, he is unraveling the norms of modernity imposed in Anatolia in 1923 by the founder of the republic, Mustafa Kemal Atatürk, while also recovering the legacy of the Ottoman Empire with its religious and feudal traits and its aspiration of becoming an international Islamic force. All this without formally destroying––indeed, by taking advantage of––the country’s democratic institutions.

With a style part-reportage, part-essay, Mourenza and Topper deftly combine biography, sociology, and chronicle to capture this crucial moment. They draw on research carried out over the course of a decade, when the authors covered events in the country for the main Spanish media outlets, as well as dozens of exclusive interviews for the book: with Erdoǧan’s childhood friends, colleagues from the party, political analysts, opponents, combatants, and functionaries.

Highlights Democracy Is A Streetcar

The rise of Erdoǧan y and the transformation of Turkey

The Kafkaesque evolution of a country on the brink of the abyss.