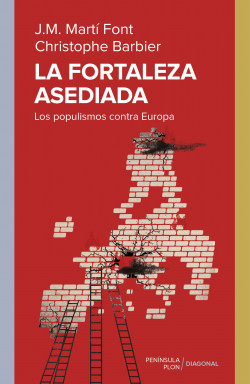 The fortress under siege

What the reader holds in his hands is an x-ray of the Europe emerging from the tsunami of the Great Recession. It is also a review of the current state of the European Union in general and of the countries that make it up, in particular, with a focus on the political parties and movements that have emerged in the wake of the crisis and which have been called populist. From both political extremes, these parties challenge the forces that have been hegemonic in Europe since the second half of the 20th century, address broad sectors of society and aspire to power.

Written by two veteran journalists, one Spanish and one French, The Fortress Under Siege unfolds on constantly evolving terrain, in what was first the devastating Greek debt crisis, then the Brexit, which completely changed the European project; then the surprising election of Donald Trump in the United States, which added destabilizing elements, especially because of his anti-Europeanism and even his intention to leave the Atlantic Alliance, and, later on, the independence process in Catalonia, the unexpected victory of Emmanuel Macron in France, the new Central European authoritarianisms and Scandinavian xenophobia or, more recently, the elections in Holland, the United Kingdom, Germany and Italy.

In Europe, anything can happen in the next few years. And this book is the map to understanding it.

The political situation in Europe today, in the midst of an economic and humanitarian crisis.