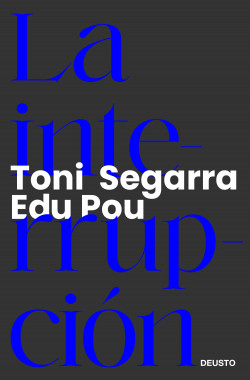 The concept of interruption is one of the central elements of advertising theory. The debate on interruption came to the forefront with the emergence of the internet. Two of the world’s most prestigious creatives, Toni Segarra and Edu Pou, join this debate in the book you hold in your hands.

Interruption is at the heart of the two advertising currents that Toni and Edu represent. Segarra is a son of traditional advertising, where the TV spot reigned supreme, and interruption was necessary to capture the attention of an uninterested audience. Pou belongs to the next generation: he is a digital native and began his career as the internet was taking off, with the understanding that post-digital advertising aims to create content attractive enough for the audience to come to it voluntarily.

Pragmatism versus idealism. This is the dichotomy that constantly appears in debates between Toni and Edu. But their conversations go far beyond advertising, and delve into the full implications of the concept of interruption.

Their contrasting points of view, often clashing and without filters, offer readers a master class on the adaptability of advertising and let them discover the ways interruption acts as a determining factor in human existence.

A master class on the advertising profession through the confrontation between the opposing visions of two prestigious creatives.