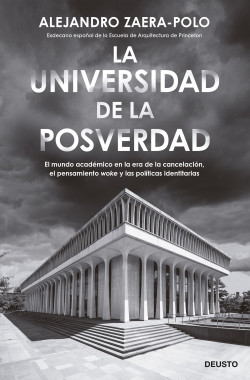 The University of Post-Truth

The academic world in the era of cancel culture, woke thinking, and identity politics.

Alejandro Zaera-Polo, one of the world’s most renowned architects, was dean of the Princeton School of Architecture until a lawsuit was brought against him for plagiarism. Zaera-Polo sued Princeton for defamation. Ideological control over the work of his students and the compulsory supervision he was subjected to finally became too much. So the architect declared war on the university: he persisted doggedly in his claim to academic freedom and kept the receipts for publication: more than 800 pages of documents that show, email by email, how identity politics, groupthink, and pressure are being harnessed by powerful people to impede academic freedom and grab power.

This book is the result of his experience of cancellation and the evidence the author gathered. Zaera-Polo tells the story of his “revenge” against the university where he was a professor and his rejection of the culture of “alternative truths” that has taken root in American universities. The purpose of the university should be the search for truth, but at Princeton, interpretations based on race, gender, and class take precedence over facts. The Spanish architect shows how contemporary academic authority uses a whole arsenal of mechanisms, from unanimity to groupthink, to turn lies into truth. A story of the violation of academic freedom for the sake of ideology that we would do well to take note of to prevent postmodern nonsense from stifling rigor and free expression on our campuses.

A first-person account by the former dean of the Princeton School of Architecture.

One of the world’s leading architects describes the climate of ideological purges in an elite American university.