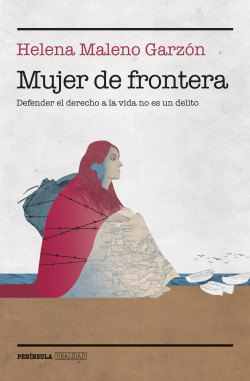 Helena arrived in Morocco in 2002 with her son, two suitcases, and a three-month project. That was how she came to know the illegal camps in the forests surrounding Ceuta and Melilla and the different communities, often organized according to their countries of origin, that try day and night to get over the border and make it into Europe. And she couldn’t leave. She decided to move to Tangier and help however she could. And above all, to denounce the situation there.

She received her first call from a raft in 2007. She had met one of the young men traveling on it days before and had given him her number. The raft was sinking. She looked for the phone number of the Rescue Marines and called to have them save the vessel. That was the first of many calls and many tweets about rafts gone astray.

One afternoon in November 2017, as she was going home, Helena found two plainclothes policeman waiting for her. They told her the Moroccan courts were accusing her of human trafficking and promoting illegal immigration. That was the beginning of a judicial whirlwind that brought to light dossiers the Spanish police had gathered to incriminate her and had later passed along to the Moroccan authorities.

Her case was eventually thrown out, but it gave rise to an international movement supporting her and revealed how far things can go, and how dirty they can get, when borders are in play.