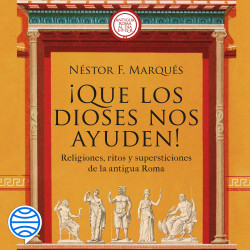 May the Gods Help Us!

A thousand years separate the primitive gods of ancient Rome from the establishment of Christianity as the official religion of the Western Empire. During that time an amalgam of beliefs developed in ancient Rome: from the Lares, the household gods, and the Roman divinities themselves, to the gods of Olympus imported from Greece and reinterpreted “Roman style”, passing through the Eastern cults of Mithra or Cybele until reaching Christianity, first persecuted and finally adopted as the official religion.

Here is a book that is structured in four distinct parts that fit perfectly with the natural and virtuous cycle of the universe, of nature and, for many people, also of the human being: Birth, Growth, Maturity, Death and Resurrection.

The first part deals with the birth of Roman religious sentiments, the first ideas and thoughts about divinities and how they developed in monarchic Rome. In the second part, the growth of the system, the organization of the priesthoods, the rituals and even the negative aspects that arose from them -or against them-, with a special focus on the republican period. The third part examines the maturity of the Roman religions, both in the public and private spheres, at the moment of greatest splendor: the high Empire. And although in this third part we also talk about pandemics and even death, it will not be until the fourth part when we really get to death and resurrection. For it is not a question of physical death, but rather the gradual process of change that Roman religiosity undergoes during the lower Empire. The death to which the author refers is that of the traditional Roman religions, while the resurrection is the one carried out by Christianity.

Highlights May the Gods Help Us!

The beliefs of the ancient Romans explained by a highly respected popular historian.