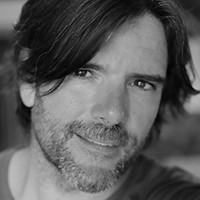 The world knows him as Charly Sinewan, but his real name is Carlos García Portal. Born in Madrid in 1975, he has been traveling by motorbike since 1994. In 2009 he began his great life project: traveling around the world in stages. He has been to five continents and numerous countries, he doesn’t know exactly how many because he doesn’t count, but he figures around ninety.

Since 2013, Carlos has been a nomad: this means he doesn’t have a home and is always on the move. In his day-to-day life, he posts videos on YouTube, writes for a number of outlets, and now, publishes with Planeta.

Before you take the risk of following in his footsteps, be sure you know he is happily lost.