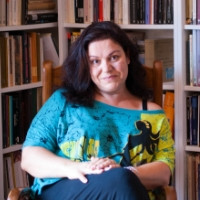 Care Santos (Mataró, 1970) is an author and literary critic. She has written ten novels, among them Habitaciones cerradas (Closed Rooms, 2011) – which was adapted for television–, El aire que respiras (The Air You Breathe, 2013), Deseo de chocolate (Longing for Chocolate, 2014, winner of the Ramon Llull Prize), Diamante azul (Blue Diamond, 2015) and Media vida (Half-life), which won the Premio Nadal in 2017.

Her work has been translated into more than twenty languages, including English, German, French, Swedish, Italian, and Dutch. Her criticism is regularly published in a wide range of Spanish cultural outlets.

Care Santos excels in creating moving, addictive family sagas, and exploring the secrets and memories of families during several generations. Her novels are always written using a female point of view, but the stories are for a broad audience, mixing the ingredients elegantly to please the readers: Love, secrets from the past, strong feminine characters, intrigue, narrative tension and evocative historical framework.


“Every family has a story, unfortunately, we have a short memory. There are stories that nobody remembers or that are passed from mother to daughter and remain as only old stories. But these household tales are the ones that matter, at least, to me.”
Care Santos