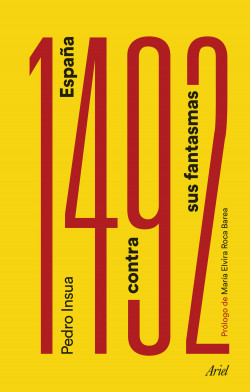 1492. Spain against its ghosts

Powerfully established ideas exist in the Spanish imagery that act like great truths: Al Andalus was a plural and rich society that fell into decadence with the Christian conquest, the discovery of America revealed the bloodthirsty character of Spain, the ideas of the Enlightenment found no echo in Spain... Visions, all of them, aimed to consolidate the idea of Spain as an intolerant and failed nation.

Thus, according to the summary judgment of many, it is precisely this same negative identity that is the only basis justifying its unity today. In such a way that Spain ends up becoming a political society, but a political society based on hatred and fanatical violence.

This book seeks to address these ghosts installed in the Spanish imagery, so as to reverse, without omitting or exaggerating anything, each of these historical phenomena associated with Spain, and which in the historiography appear completely unhinged in their black-legend version.