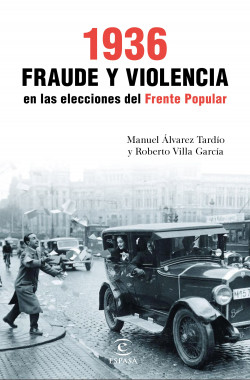 1936. Fraud and Violence in the Popular Front Elections

The general elections of February 16, 1936 were the most controversial episode in Spanish politics before the Civil War. They looked as if they would determine the future of the Republic, and indeed, they did.

With rigorous and unprecedented research, Manuel Álvarez Tardío and Roberto Villa Garcia have reconstructed the stirring history of an election staged on the threshold of war and demythologized the Manichean, bellicose fairy tales constructed in its aftermath.

This book offers answers to questions such as: why was this election experienced as a dramatic plebiscite between left and right, with a high degree of violence; why did the government that oversaw the elections step down before the votes were examined; and, above all, whether it was fraud that assured the triumph of the Popular Front. Such issues form the backbone of this incomparable work.

Manuel Álvarez Tardío y Roberto Villa García, two historians from the Juan Carlos University in Madrid, have written a book that will change our perspective on the elections of February 1936, which were a victory for the Popular Front, describing the electoral fraud and the atmosphere of extreme violence that reined in the months before and after.

Highlights 1936. Fraud and Violence in the Popular Front Elections

“The end of the last of the great myths of the 20th century.”

A book that reveals the fraud that allowed the Popular Front to triumph in the elections of 1936.