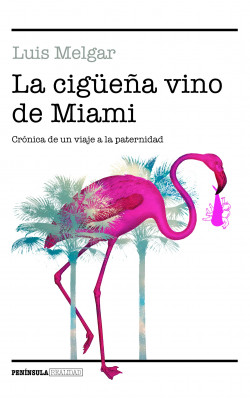 The Stork Came from Miami

In August 2016, Luis and Pablo arrived in Miami prepared to learn about the process of surrogate pregnancy, one of the possible ways they were considering to fulfill their desire to become parents. Almost by chance they arrived at the office of Wendy, the charming but chaotic owner of the agency that would allow them to realize their dream. They never imagined that the next day they would find themselves at the clinic filling out a million forms and having their first tests done as a preliminary step towards starting the most important journey of their lives. The rest of the characters were not long in appearing: Alexia, the lawyer with infinitely high heels; Robin, the nurse who acted as the clinic’s factotum; Dr. Hoffman, a lover of Spain and bent on speaking his bungled Spanish... However, the protagonist of the story had yet to be found: the pregnant woman.

The road was unquestionably full of obstacles. Zika epidemics in Florida. Unexpected blood test results. Donations of sperm in bathrooms without locks in Venezuelan hospitals, with children shouting, “Mom, this man is taking too long”. Mobile phone applications to choose the egg donor. Wendy almost missing. An endless number of small adventures until they finally met Salisha, the extraordinary woman who was willing to accompany them on their journey and to give birth to Luis and Pablo’s daughter.

Who is Salisha? What’s her story? Why did she decide to help Luis and Pablo on their journey? Was she afraid of the risks? Wasn’t she afraid of getting attached to the baby and becoming unable to part with it?

It all started with a small embryo, just a handful of cells clinging to life in its test tube. Salisha took it in and nurtured it with love for nine months. The entire family gathered in Miami to welcome their new member. This is the extraordinary story of a baby and the many people who collaborated to bring her into the world.