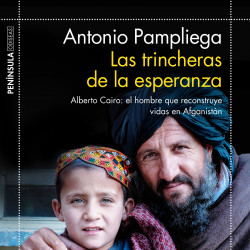 The Trenches of Hope

Afghanistan, 1990. The pro-Soviet regime in Najibullah was in its final throes in the face of the imminent victory of the Mujahideen. The country was unknowingly engaged in a fratricidal civil war that would eventually lead to one of the most brutal regimes in modern history, that of the Taliban. In this chaotic setting, a young Italian physiotherapist named Alberto Cairo landed at Kabul International Airport. One more romantic soul. Some thought he was just a naive man who would end up fleeing like everyone else.

Twenty-eight years have passed since then and that Italian idealist continues to lead the Red Cross mission in Afghanistan. Mujahideen, Taliban, the invasion by the Americans in October 2001, the arrival of democracy, the more recent entry of the Islamic State... Almost three decades and the hospital run by Cairo has not closed for a single day.

Afghanistan is, along with Cambodia, Colombia and the border between the two Koreas, the place in the world with the most anti-personnel mines. Hundreds of thousands of lives have been mutilated because of them. Human beings turned into pieces of themselves, without hope, without dignity, without future and without dreams. But Cairo managed to change all that. He decided to bet on the underprivileged of Afghan society. He turned an army of cripples into the pride of an already proud nation. He molded them to regain dignity and raise the banner of hope.