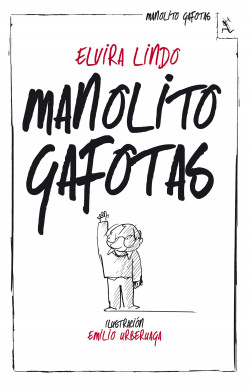 The bestselling phenomenon from Spain about ten-year-old Manolito’s misadventures in Madrid.

Manolito Four-Eyes, as everyone knows him in his neighborhood of Carabanchel in Madrid, is a talkative ten-year-old boy who lives with his parents, his grandfather Nicolás and his little brother, the Imbecile, and who is always willing to tell his vision of things. Manolito likes to be called Four-Eyes; in his school, anybody who's a little important has a nickname. His best friend is Big Ears - though they did get into a fight once because Manolito said he'd rather have Coke-bottle glasses than monkey-butt ears like Big Ears.

“Don’t try to be different,” says Manolito’s mother. But he can’t help it—he doesn’t have to try. Whether he’s fighting over the One-and-Only Susana, trying not to fight with Jihad the Bully, telling his entire life story to the school psychologist, or discovering the true meaning of World Peace, ten-year-old Manolito is a real original.


Elvira Lindo’s series about the adventures of Manolito Four-Eyes is a children’s classic in Spain, where it has inspired feature films and a TV series. It is also popular in other European countries. She has received Spain’s National Children’s Book Award for her Manolito Four-Eyes Series.