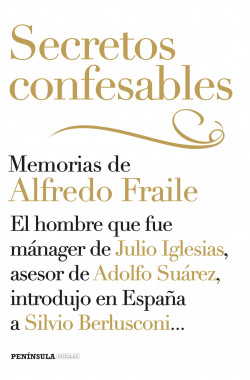 Memoirs of the man who was Julio Iglesias’ manager, Adolfo Suarez’s advisor and who introduced Silvio Berlusconi to Spain...

Alfredo Fraile Lameyer is one of those figures whose peculiar trajectory has allowed him to know from the inside power, glamour, fame and political, economic and social success. Always from a discreet second row, but close to historical events like few others, for more than forty years Fraile has seen what no one else has seen and listened to what no one else has heard.

Son of the well-known film producer of Spaghetti Westerns, who gave his surname to one of the film towns in Almeria’s Hollywood, Alfredo Fraile is, for many, still “Julio Iglesias’ manager”. It was not for nothing that he created the legend of the most international Spanish singer of all time and that he’s the one who best knows the person behind the idol, from the secrets of Iglesias’ “urgent and secret” wedding with Isabel Preysler to the couple’s divorce, which he himself announced to the world, or the singer’s years of success and glory in America, the underside of which is full of untold stories.

But Alfredo Fraile is more than this. He is the magician of political communication who re-launched the figure of Adolfo Suarez in his return to the forefront of public life in 1986. And the advisor who brought Silvio Berlusconi to the Spanish television scene and helped him set up Tele 5. And the discreet facilitator of interests that brought Morocco closer to Spain in the early 1990s. And the architect of the ADO’92 Olympic project. And the loyal favorite of the Kuwaiti investors of KIO who flooded Spain with their petrodollars 25 years ago, which made it possible for him to become familiar like no one else with the protagonists of Spain’s recent business history, such as Javier de la Rosa, the Albertos, Mario Conde and Enrique Sarasola.

From Carmen Ordóñez to Carlos Goyanes, from Cecilia to Hassan II, from Prince to José María García and from Sinatra to Manolo Escobar, to name but a few, the list of celebrities Fraile has dealt with personally, and of whom he knows secrets never before revealed, is as long and varied as his memoirs, which constitute a first-class journey through the last four decades of our recent history.