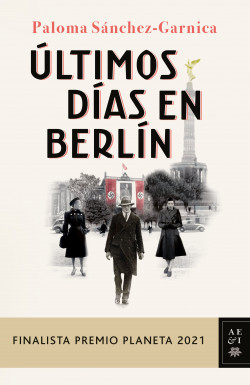 A thrilling story of love and war, of struggle and survival, where love and hope will triumph over hatred and rage.

When Yuri Santacruz attended Adolf’s Hitler appointment as chancellor he could hardly imagine how much his life in Berlin was about to change. He had just landed there a few months before the event, after a hectic and painful flee from Saint Petersburg along with part of his family, choked by a revolution that had left them with nothing. The Revolution also severed Yuri’s bond with her mother and his little brother: the Russian authorities would impede them to leave the country. This is a memory that will forever haunt Yuri, who would never give up his hopes of reuniting with them.

Once in Berlin, where Nazism is starting to take over German politics, Yuri, the protagonist of the novel, would show his understanding of what justice is, while trying to help and defend a young Communist from the abuse of Hitler’s storm troopers. On that same day, Yuri will also meet the love of his life, Claudia, a young member of the Nazi party that has just married an SS commander. After this unpleasant event, and the shock of meeting Claudia, his comfortable life will take an unexpected turn. What had been his main priority until that point; that is, to find his mum and little brother, will be replaced by a more urgent one in such a tumultuous period: his own survival. Nazism would become increasingly suffocating for Yuri and his whereabouts, as will the outbreak of the Second World War and all its inherent consequences. However, this won’t be the only obstacle that Yuri will have to confront in order to survive. While he has to deal with the terrifying Nazi manhunt, Yuri will also witness and suffer the dehumanisation of another ruthless and cruel political regime in Russia, his homeland, where Stalinism is bending the will of all its habitants, including his own family.

“Sánchez-Garnica novel travels to two major events in recent history, through their most intimate aspects. The book tackles both the motives behind the rise of Nazism, and life during Stalinism, a period where ‘it was easier to believe than to know’.” La Razón

“A gripping story of war, love and the struggle for survival.” La Vanguardia

“A turbulent and passionate journey through a particularly tumultuous historical period.” ABC