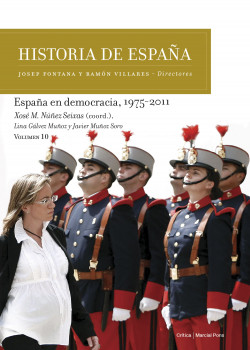 In this volume, Professor Núñez Seixas offers us a new vision of the breakup of the Franco regime, of the management of the Transition, the beginnings of the constitutional government, which concluded with the “socialist era” (1982-1996), Spain’s incorporation into the European Community, and the development of the system of autonomous regions.

The stage of the conservative administration of José María Aznar (1996-2004) was characterized by essential continuities in the realm of political economy, dreams of overseas grandeur, and the rebirth of territorial disputes. When the socialists returned to power with Zapatero at their head (2004-2011), the reformist euphoria led to a deepening of social rights and the country, the state, with its system of autonomous regions, fell beneath the shadow of the devastating impact of the economic crisis.

Lina Gálvez presents a vision of economic evolution as a whole: the effects of becoming part of the European community and the birth of the euro, speculative bubbles, the crisis, and the beginnings of austerity politics. In conclusion, Professor Muñoz Soro closes out the panorama with an analysis of cultural revolution and the relationship between intellectuals and the state.

A reading of Spain’s recent history from and for the twenty-first century.