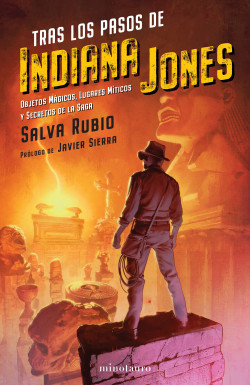 Following in the Footsteps of Indiana Jones

Magical objects, mythical places, and secrets from this stirring saga that has captivated generations of viewers

Following in the Footsteps of Indiana Jones is the most thorough work to date on one of the most beloved characters in modern cinema. For the first time, we have a complete biography of Indy with his journeys, investigations, and episodes from his life in chronological order, just as they appear in the four films, the TV series, the comics, the novels, and the video games, right up to the threshold of the fifth film.

Apart from the character’s story, Salva Rubio has brought together the sources that inspired Indiana’s creators, George Lucas and Steven Spielberg, plus the plot variants and finales the scriptwriters imagined but never filmed. He also examines the cultural impact the archeologist with the whip has had on generations of viewers.

Following the adventures of this intrepid researcher, the author visits the real and mythical places where our hero has touched down, analyzes the treasures he’s held in his hand, and explores mysteries from the past and present that even today have yet to be cleared up. He plunges readers into the cultures, countries, villages, and arts Indy found on his path, conveying the excitement of finding a clue, a secret door, a hidden passageway that brings us closer to understanding who we’ve been and therefore who we are.

History, archeology, criticism, cinema, mythology, and mystery come together in this definitive book about the Indiana Jones universe.

The best way to celebrate the 40th anniversary of Indiana Jones and prepare for the debut of the fifth chapter in the saga, set to be released in June of 2023.

Includes a full-color map with emblematic objects from the saga. The reader will also find in the margins of the book the title of the works where the adventures, treasures, and references mentioned throughout can be found.